A year ago, there was a baby hummingbird on our lawn. Without knowing what to do, my mother called for help from a bird agency. They told her to put him in box, that he was trying to fly, but his wings were just not there yet. His parents will still be able to care for him. Eventually, he flew.

In this next experience is well, very personal.

There was this nest of two eggs within it. We all knew perfectly well that it was a hummingbird's nest right in front of our door. It was dangling on a vine close to the gate's door. I told mom that she should have signs out so when the gardeners come through they be careful for the little ones. Also, we should use the garage door instead of the front door so we don't scare the parents off. My mother would complain about how they will never fly off. As time progressed, I was not home for personal reasons. My father passed away and that very day, the two little hummingbirds flew. My mother told me. None of us knew that my father had a blood clot in his leg (as well as other details). He appeared to be so healthy. Mom told me how he looked so peaceful lying there on the couch, how he looked like he did not suffer any pain whatsoever. His passing was a few months ago.

I know my father is home with our Creator. I know that he visits us, I don't have to see him or hear him, I just know. He's my father and he'll always be with us. I also know, that... we are not here forever. We're here to learn, grow, and experience our life until it is our time to go home. We are all family, we are all connected, and we are all in this together. No one is a loner, we always have someone watching over us, especially our Great Spirit. I know that my Creator is always watching, I know that he's right here, around me, above me, surrounding me, within me, as well as every other living being.

I love you all for you are my kin. 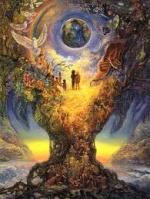 I love your post and what you said about Humming Birds. Thank tou.

Number of posts : 32
Age : 68
Location : Castro Valley, Cailifornia
Hobbies : Gardening, Knitting, watching TV, and movies
Tell us about yourself : I consider myself a curious learner, I love to experience life and the things in it.
Appreciation Points : 40
Registration date : 2009-11-03

Tsura, that is a lovely story of your hummingbirds. I do believe birds have a magical presence and that we truly all have some form of a guardian angel looking out for us.

This is a posting from 4th June I posted on my seniors forum, I would now like to share with you all.

We have a small back garden with several trees, so birds nest in abundance, and it is not unusual year after year to find the odd orthan fledgling, many dont survive, so is it natural to cry over watching a bird die ( young blackbird ) because I have this morning.
I found a young, though not too young blackbird sitting still, very cold, hunched in a corner of our brambled corner. I picked it up and moved it to a warmer spot inside our small raised alottment bed, covered it with tissue and made silly bird noises in hope it would respond. It was breathing, though very weak and would not open its beak, I knew it had given up and was dying but it did start to feel warmer so there was hope. I kept coming to check on it, keeping our three dogs inside the house, as I did not want them including Pup Toby getting at it, as Toby had already spotted it in the bramble. One time I went to check on the bird, it had toppled over, wings outstrestched, so I picked it up, it just filled the palm of my hand, placed it neatly back onto the tissue and paper towel, its eyes opened in response and seemed to look in my diection, although at times its head also rotated round, which was not a good sign. I kept making bird noises and talking to it, saying come on, you dont have to die, be strong, I just felt so helpless, but wanted the bird to know that there was someone there who cared, I tried my best, but it has now died, and I have cried and asked God, why did he have to take this innocent little bird, he didnt have to do that. Am I just a big softy, why do I feel so angry, I tried my best, but I failed . Reminiscent to two years ago, also on a Saturday i was doing and saying the same thing to my late Petra ( dog ) aged 15, which was also in vain. This little bird is now in the hands of God. R. I P little blackbird.

awww, your story brought tears to my eyes, I am so sorry for your losses )-:
RIP Petra and Little black bird (-:

Number of posts : 757
Age : 66
Location : Phoenix, Arizona
Hobbies : Living
Tell us about yourself : I feel at peace outdoors, listening to nature, the birds to the bubbling creek, recharges my soul.
Appreciation Points : 1030
Registration date : 2009-01-10

Tsura that was absolutely Beautiful, you have a great understanding of Life & the Big Picture. Those Hummingbirds flew, they knew it was there time to fly and be free.

I feel Your father & those Hummingbirds were connected in some way, and it is a wonderful sign. Its Beautiful that you know your Father still visits, you are very open, he Loves You & may be what many call Guardian Angels, Spirit Guides...

I have heard personal stories when Loved Ones moved on, they would be there in Spirit and Guide & Protect the ones they Loved here on Earth. Some personal stories the person felt their Loved one in Spirit Guiding them to Protect them from a Dangerous Situation. Our Loved ones are always there for us when we need them, if we are open to their Guidance. i think its Wonderful that you are so Connected Tsura.