Sometimes reality is just as stunning as science fiction

Science fiction movies have spoiled us on high definition views of our planetary neighbors, but real-life photographs with equal jaw-dropping potential are exceedingly rare. That's what makes NASA's awe-inspiring snapshot of Saturn (hi-res version here) such a stunning piece of eye candy. 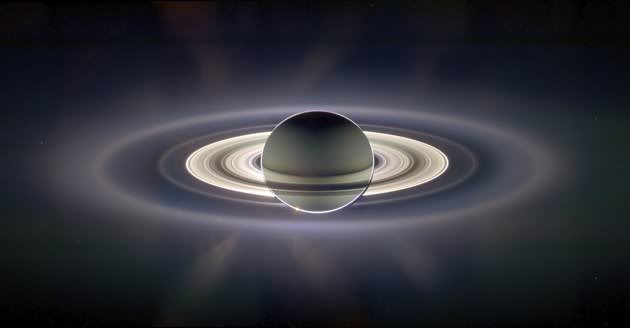 Taken by NASA's Cassini robotic orbiter, the shot was captured from the dark side of Saturn as the Sun's bright rays illuminated every piece of dust and debris circling the planet. Cassini has offered astronomers a never-before-seen look at Saturn and revealed more information about the planet than any craft before it. The craft has taken so many pictures of the ringed wonder that they were recently made into a short flyby film that looks like it was created by George Lucas rather than a robotic space explorer.

The Cassini probe was launched in 1997 and took a further 7 years to reach Saturn's orbit. The total cost of its overarching objective of studying the ringed planet stands at a staggering $3.26 billion. However, the wealth of information it has wrought — including amazing pictures like the one above, and recordings of massive lightning storms on the planet — have already made it one of the best investments in space exploration. Hopefully Juno — which began a 5-year trek to Jupiter just last month — will bring us some equally stunning shots of Saturn's neighbor.

Number of posts : 104
Tell us about yourself : I'm interested in all things New Age and Spiritualism
Appreciation Points : 120
Registration date : 2011-03-24

would Love to Travel there in Spirit

Number of posts : 757
Age : 66
Location : Phoenix, Arizona
Hobbies : Living
Tell us about yourself : I feel at peace outdoors, listening to nature, the birds to the bubbling creek, recharges my soul.
Appreciation Points : 1030
Registration date : 2009-01-10

I think its amzing just what NASA and other space scientists can now show us of our planets.

Only recently I saw pictues of the landing sites of the lunar craft and actual footprints / tracks that were left by them that flew in it, although some dispute whether genuine. We have also seen other pictures taken from orbiting probes / satellites of other planets which give such a close up view that you really do feel like your there yourself..

Agree yes, Saturn is probably the most stunning planet of our universe.