Samhain is the most-loved Sabbat of many Pagans. The dark half of the year starts on this night. It is the Witches' New Year's Eve, and is the third and final harvest festival in the Wheel of the Year.

The name, "Samhain" comes from the Celtic calendar, and it means, the month of, "November."

On this night, the veil between the worlds of the living and the dead is the thinnest. It is the Day of the Dead for Pagans of today, as it was for the Celts, Egyptians, and ancient Mexicans. It is a night to remember deceased loved ones and honor ancestors.

As a feast of the dead, it was believed the dead could, if they wished, return to the land of the living for this one night, to celebrate with their family. And so the great burial mounds of Ireland (sidh mounds) were opened up, with lighted torches lining the walls, so the dead could find their way. To this day, we set candles in the windows to help light the way, so that these deceased loved ones may find their way back to the spirit world, from where they came.

Extra places were set at the table and food set out for any who had died that year. And after supper, there are many stories that were told about the deceased family members. All would take part in sharing their own personal memories.

Perhaps the most famous icon of the holiday is the jack-o-lantern. Some people think it came from either Scottish or Irish origin. However, it seems clear that it was used as a lantern by people who traveled the road at night. The scary face was supposed to frighten away spirits who might otherwise lead them astray. Even today, when we set these jack-o-lanterns on porches and in windows, they still cast the same spell of protection over the household.

Bobbing for apples represents the rememberance of a Pagan 'baptism' rite called a 'seining', according to some people. The water-filled tub is seen today as a Cauldron of Regeneration, into which the head of the person wanting to be baptized is immersed into water. Also remembering that the participant in this game was usually blindfolded with hands tied behind the back, is of a traditional Craft initiation ceremony.

The custom of dressing in costume and 'trick-or-treating' is a Celtic origin, and possibly Scotish origin as well. But, there are some important differences. In one tradition, the custom was not for children, but was actively indulged in by adults. With the 'treat' being alcohol. However, in other traditions children were encouraged to dress in costume, and run around in a group, looking for tasty treats.

Samhain was also a great time for divination, from ancient times until even today. Foods that were in season such as apples and nuts were often used in these rituals. Apples were peeled, then the peel was tossed over the shoulder, and its shape was examined to see if it formed the first letter of the future spouse's name. Nuts were roasted, and their movements were interpreted. If the nuts stayed together, so would the couple. Egg whites were dropped in a glass of water, and the shapes foretold the number of future children.

And in ancient times, the roaming bands would sing seasonal carols from house to house, making the tradition very similar to christmas carroling. In fact, this tradition was once practiced at all of the major holidays.

To Witches, Halloween is one of the four High Holidays, or Greater Sabbats, or cross-quarter days. Because it is the most important holiday of the year, it is sometimes called 'The Great Sabbat.'

.So I wish everyone a Blessed Samhain, & a Happy Halloween!!! I also pray that all your jack-o'lanterns burn bright on this All Hallow's Eve. 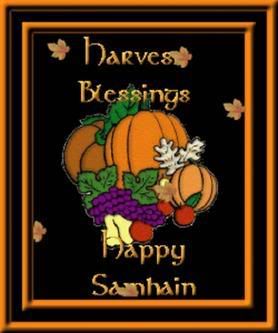 Number of posts : 284
Age : 55
Location : Canada
Hobbies : I love astral travelling...
Tell us about yourself : I love animals, and nature. I believe we all come from the same Divine Sacred Source, and we are all entwined as one, with the universe.
Appreciation Points : 307
Registration date : 2009-10-10

Happy Samhain to you too, Serenity!
Great information!